Getting back to the basics

It has been more than a moment since I have blogged. Which as I have said this blog is a work in progress. Everything in its own time. So now my blog is”on”. My blog is going to be a mash-up of everyday life, work, and play. This entry will be a quite different from the prior ones. I went back and forth deciding if I would write it. Obviously I decided yes because it was strong on my heart and mind, as it is everyone’s. I am from a city that is quite large but not. It still remains a community where everyone somehow knows each other or someone in their family. The worst fear of every mother and father has happened. A beautiful soul was taken way before her time. Miss Hailey Owens of Springfield, MO. I pray that the words I write are directed from God and come across the way I intend it to. When word was out of her disappearance my heart dropped. Through the night as more information came about I couldn’t keep a dry eye and my was so heavy it literally hurt. My brain was racing. As was everyone else. All I could think about was Hailey and her family. Praying somehow she got away. Then the unspeakable was announced…which I won’t discuss in this. The Owens had to go through what no mother, father, brother, sister, or family member should ever have to experience.  The whole community hurt for her family. Emotions were all over the place for everyone. Our city really did stand still and pretty much stopped. Everyone held their children a lot closer and could not say I love you enough to them. Which is what they deserve everyday. With events like and so many emotions you never know which way things will go. I doubt there was a parent out there that didn’t talk with their children about safety.  I see neighborhoods reaching out planning to take the time to get to know their neighbors. Do we keep our children in a bubble? If we do they will they ever be able to not live in fear? Speaking from a mother that has to know where my kids are at all times…wanting them pretty much connected to me. But then all of a sudden they are not 5 anymore…they are 16 and going to college in a year and half. We have been given the greatest honor out there which is to be a parent and direct these little amazing souls God has given us. But, also we have to teach them to be strong and independent. We have to teach them to be smart, loving, kind, independent, help others but watch out for strangers, be careful, and all without living in fear. Not the easiest task…there is not exact way of doing it. Then the idea of The Candlelight Vigil March in Honor of Hailey Owens was birthed. To show love and help one of our own families to keep standing. I really can’t even imagine being in the Owens shoes. To show we are here for more than just our immediate family and children. That we are a community. A big family. What started out as a small gathering grew to something so breathtaking. Over 10,000 showed up to let their candles burn bright for Hailey and her family. To celebrate this amazing child. That everyone that talked about her says she was truly pure sunshine and joy.  I decided I was going to attend as soon as I saw there was going to be a vigil. I talked with others that were getting it together and decided I would take a few shots that could be later given to the family. Still I had mixed feelings. I didn’t know if I would take 1 or 2 shots and stop or if I would take more. It would depend on the vibe of the event and if I could even do it with out sobbing. After arriving I was speechless and for me that is something. My community came together in the name of love, peace, and solidarity. Out of something so horrific came something so beautiful…just as Hailey was. I need you to know I do not want that comment to be taken lightly or insensitively…I take none of this lightly. When you see over 10,000 beautiful souls gathering with lite candles and singing “this little light of mine”…which words were switched to “this little light of Haileys”…while holding each other. You really can’t do anything but stand in awe of everything. My heart broke as I watched her mother walk. Knowing she appreciated everything but what she must be feeling. That’s her baby. My prayers will continue for Haileys family, friends, and community. I will continue to pray for God’s direction on raising my children. Not to raise them in fear but to be present and aware. If they are to be world changers and leaders they can not fear helping those in need. Hailey will not be forgotten. Through the unspeakable she has inspired so many to get back to the basics. To treasure each other and the little things. I wish I could wrap my arms around the entire Owens family and just stay there for as long as they could stand me. I am in spirit. God is wrapping his arms around them. His hands are big enough and His love is deep enough. I leave you with… I am truly blessed to live in the community I live in and to call it my home. They shined for Hailey in the midst of darkness. 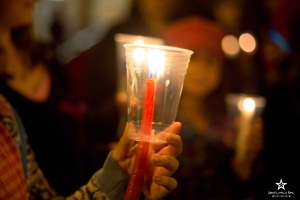 Candles shined bright for Hailey the night of the vigil.

My lil man Isaac is so sweet.  After Haileys vigil he wanted to make sure all candles were still lit before we left. He said, “Mommy thank you so much for bringing me to this…we showed love”.